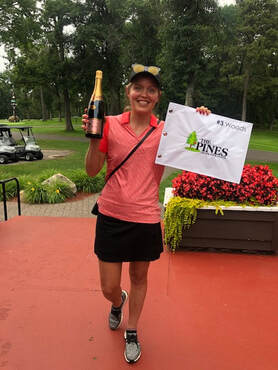 ​​Grete Eliassen Skogen celebrating her closest to the pin win with a hole in one!

Well, what started as a very simple, casual GLSS golf outing, turned into a very fun celebration on Saturday at the Pines! There were four foursomes and the duo of Margaret Lord Anderson and Mark Anderson hitting double. First off the tee was the foursome of Tom Spicola and Kari Eliassen and Grete Eliassen Skogen and Josh Skogen. As they finished the third hole on The Woods the cheers and celebration could be heard. More on that in a minute.

The nine hole scramble finished in a tie at 4 under between the above foursome and the team of Chuck Arvesen, John Sumner and Tom and Nancy Lundeen. Adding to the excitement, to determine the winner, scores on the lowest handicapped holes were compared and it took until the eighth lowest handicap hole to award the overall prize of Pines gift cards to the Arvesen, Sumner Lundeen team. Tom Spicola did win the men's longest drive.

Also competing were Geno, Kim, Kristofer and Abby Hagen, who took home longest drive for the women with a complete bomb on the fourth hole, and Jim, Mary and Joe Jetland with his fiancee Lauren Charpentier, who took home her bottle of bubbly for the longest putt.

So, about that hole in one:
They say there is such a thing as an athlete gene, it would appear Grete Eliassen might have that gene. As Grete stepped up to the red tees, her partners had already hit their balls to within 10 and 5 feet from the hole. At 98 yards Grete used her pitching wedge, made an easy swing and the ball took one hop and rolled right in the hole!! She also birdied number 5, the other par three!

What is more astonishing is that this is not Grete's first hole in one, it is her THIRD! Her first two were a week apart when she was 18. When asked the question, "I'm guessing you must play a lot of golf? Grete answered, "Well, not really, some. I used to hit balls a lot in Norway after ski season when the snow melted."

So back to that athlete gene. Grete's talents on the golf course pale in comparison to her success on the slopes. Her accomplishments are so many and significant they can't all be covered here and have justice be done to them. Some highlights include, winning back to back gold medals in 2005 and 2006 at the Aspen Winter X Games.  Grete also has 6 other silver and bronze medals in slopestyle and halfpipe events at the Winter X Games and FIS Freestyle World Ski Championships. From fall of 2008 until spring of 2010, Grete produced and was featured in the ski film "Say My Name" with one of her sponsors, Red Bull. She won ESPN Best Performance in a Leading Role and IF3 Montreal Best Female Performance for her role in the film. Her other hobbies include waterskiing, wakeboarding, golf, tennis, rock climbing, skateboarding and biking.

Outside of athletics Grete is the mother of two young boys ages 4 and 2 and still finds time to serve as the 16th president of the Women's Sports Foundation, established by Billie Jean King. She is passionate about the community of female athletes and providing them equal opportunities. Her humble style was on full display Saturday as she wanted to point out the success of overcoming her last place finish in the Fun Regatta last summer in an MC with her mother Kari. You've gotta love this woman!

So, what started as a "should we even do the golf tournament question" this year turned into a super fun celebration, socially distanced of course. Thanks to everyone who came out on Saturday. What better way to celebrate your third hole in one than with your Gull Lake buddies. Thanks for the cocktails Grete and thanks for making a highlight memory for all of us! You're a bright light for girls and women everywhere!


Below left to right, Chuck Arvesen representing the Arvesen, Lundeen, Sumner team with his first place prize. Grete celebrating with husband, Josh and mom Kari on hole #3 at The Woods, Sunday August 15th