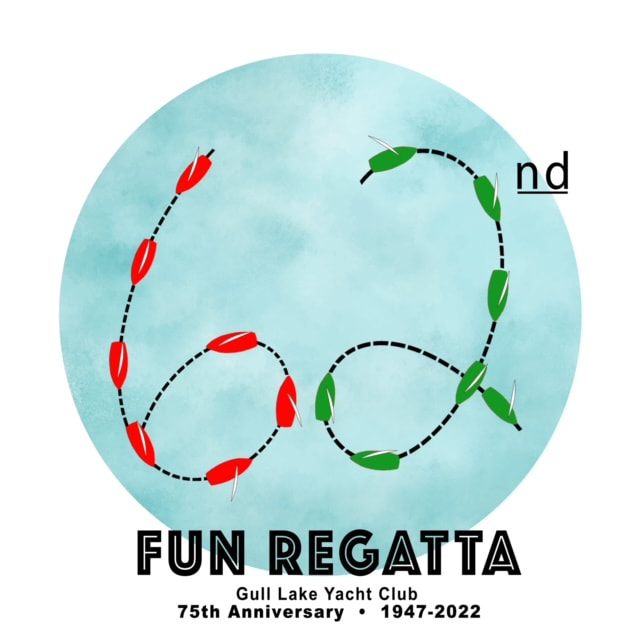 It was an awesome day of sailing! Thank you to the Gull Lake Sailing School and Fun Regatta Team Volunteers who made the day possible. Nick Driessen, alerted us to early weather predictions that called for some medium to high winds ramping up in the afternoon. Peter Dunphy, our Race Officer, followed the weather closely and made sure the fleet was safe, requiring flotation panels to be used on the masts of the scows. Our competitors briefing was held promptly at 9:30 onshore and also via radio VHS Channel 72. A modified windward leeward course was set. The start and finish line was stationary and was declared an obstruction in the course. All fleets started together in a three minute starting sequence. Initially, winds were 12 mph from the NNW.

Kristoffer Koop and his crew Sebastian Tisdell sailed a 420 keeping close with all the adjacent fleets. Two newly donated C scows in very good condition were welcomed into the group. It was great to have them on the course. Skipper Ethan Stohr with crew Wyatt Holst and skipper Tim Holmes with crew Dave Wilt were able to resume sailing after capsizing and recovering. GL 39 took the overall win in the C Fleet.

There were two keelboats. Jim and Ginger Anderson took a first place but thought it was a bit too windy to have their toy duck towing behind this year. How wonderful it was to chat with Todd and Troy Gustafson about sailing their keelboat on Lake Minnetonka. What a blast it was reminiscing about long ago sailing school and past Fun Regattas with the Gustafson brothers. They said that they will be returning for more Fun Regatta in 2022!

There were 14 MC scows competing. Three races were intense with building gusts. Some skippers were solo, some had crews. Consistent Dave Anderson and crew Morgan took first overall in 2109. A hearty welcome to Jeff Lewis in 1578, who traveled from Wisconsin to sail with us. He offered a crew position to a young sailor from the sailing school and they had a great time taking second overall.

Chris Holmes is an awesome addition to the MC fleet. He is rocking the racecourse with 2640! Katie and Gretta Arvesen skippered 2809 and 2669. They each had on board new crews, Gavan and Kirsten Gavung who were just returning from a year living in Norway and were up for the fun! They had an amazing time crewing and harnessing the wind. Both are stoked to sail more!

The Driessen boys were representing well, sailing MCs singlehanded in the building breeze. Alex ( 2727), Nick (2654), Jerry (1999), Chuck (2041) and Kevin Krippner (2657) all worked the winds to their advantage and sailed fast. Chuck, Jerry and Kevin attributed some of their new speed and sail trim tactics to information gleaned from the Ted Keller Sailing Clinic held in June.

The Sumner Family brought out two MC’s. With Eric recovering from a nasty mountain bike fall, it was amazing that he was able to recover 2647 from his capsize without assistance. John and granddaughter, Zoe in 1135 were enjoying the winds and time together on the sailing school MC.

Brooke Krivich has been sailing for three years and she and her young crew, Savannah Mendel from the sailing school finished the racing, calmly managing the gusts along the way in 2424. Super awesome to see you out there, Brooke.

Gregg Day and Bennett in 1829 were excited to work their new MAD sail but were stymied early by a broken side stay. With Covid acting up again, we held a bring your own lunch outside. Folks were pretty tired and hungry after the three races. With Bev Dunphy’s accurate recording, Kevin Krippner was able to work up the final scores. Winds crept up past our limits and it was decided by the group to cancel the afternoon races.

In short, the 61st Fun Regatta sported three great races in building breeze, a relaxing lunch outside followed by a brief trophy presentation. Sailors are looking forward to another amazing Fun Regatta. Number 62 in 2022!


Skipper Tim Holmes and Dave Wilt on our newest donated C boat from the Bromschwig family!
Brooke Krivich has been sailing for three years and she and her young crew, Savannah Mendel from the sailing school finished the racing, calmly managing the gusts along the way.
National award winning sailor, Katie Arvesen teaching husband Chuck the tricks of the trade!
The 2021 Winners and Participants!
Congrats to All! 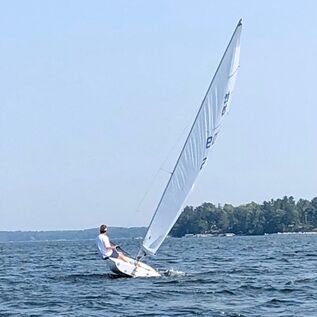 Thank you to everyone for a wonderful day of sailing on August 1, 2020, as we enjoyed the 60th Annual Fun Regatta on beautiful Gull Lake. We had a fleet of 420s, Open Class and MCs sailing on a beautiful Minnesota summer day. The wind was a fresh steady breeze of 10-12 mph straight out of the north. Frequent gusts to 16-17mph challenged the fleet’s boat handling skills. There were several two person crews handling the breeze. Those who went solo felt the challenge to keep their boat flat. The sail back home after the races was a wild ride. We all made it.  Thank you Wind Gods!

Thank you to all the friends and family members who were out on the water spectating and keeping an eye out for the sailor’s safety.   Vince Driessen was our Principal Race Officer for the event this year. He had FUN as a primary objective as well as a great sailing course (W2) and smoothly executed starts (3 minute sequence). Five W2 races of about 20 minutes each in length were sailed.  Thanks, Vince!

The GLSS/GLYC 60th Annual Fun Regatta logo gear was a super cool white camo hat and a white tech hoodie to boot!  Rumor has it that a couple small sizes remain available for those collecting Fun Regatta garb.

The racing competition was close.  Everyone sailed fast with the steady winds gusting upwards into the high teens mph.  Some notable highlights included the return of the Keller Klan from their international sailing travels to share with us their boat handling skill in the 420s.  In the 16 boat MC fleet, the racing was tight with the final scores being decided literally by a 6” margin settling the top three places of Alex Driessen, Josh Sullivan, and Dave Anderson.  In the Open Class, Fun Regatta stalwarts Jim and Ginger Anderson returned to the race course once again this year, proudly proclaiming as they rounded the leeward mark in race 3 that they prefer gin ‘n tonics over margaritas! See results below. Trophies were available for all three classes. Thank you to Mary Jetland for organizing the cool trophies.

New to the Fun Regatta History was the COVID protocols!  Of course, we were very careful to physically distance on the starting line and around the marks. We also did not have breakfast, lunch or social following our sailing.  Many participants remarked how they missed the onshore camaraderie, including the post race discussions about tactics and strategies. That is such a great part of our sport, the camaraderie and trying new maneuvers. We look forward to the 61st Fun Regatta in 2021, and focusing in on the social component of a healthy regatta next year! 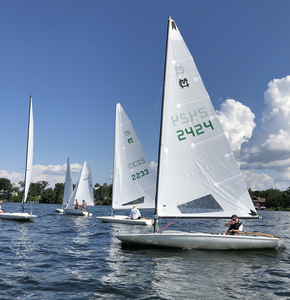 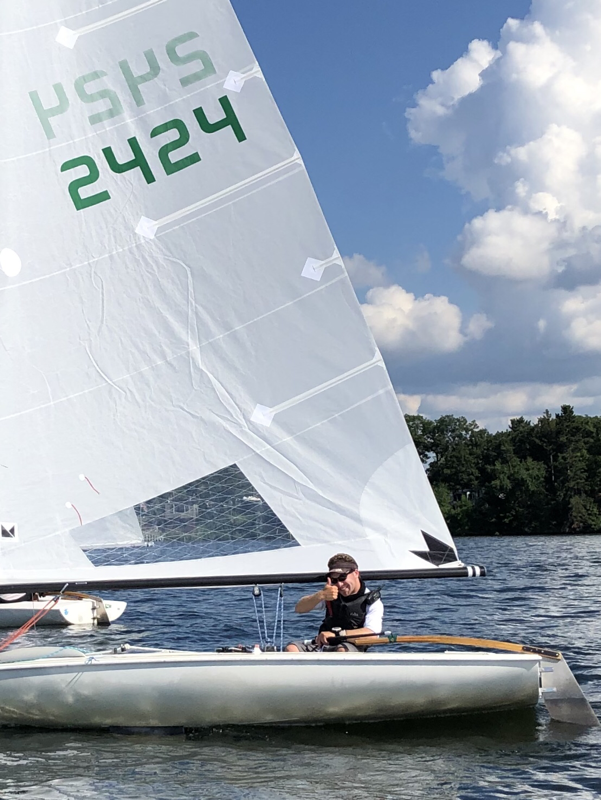 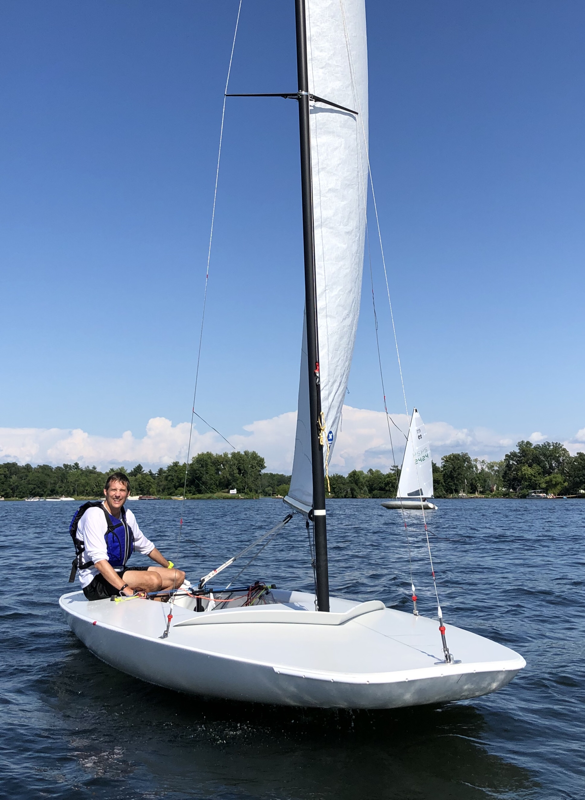 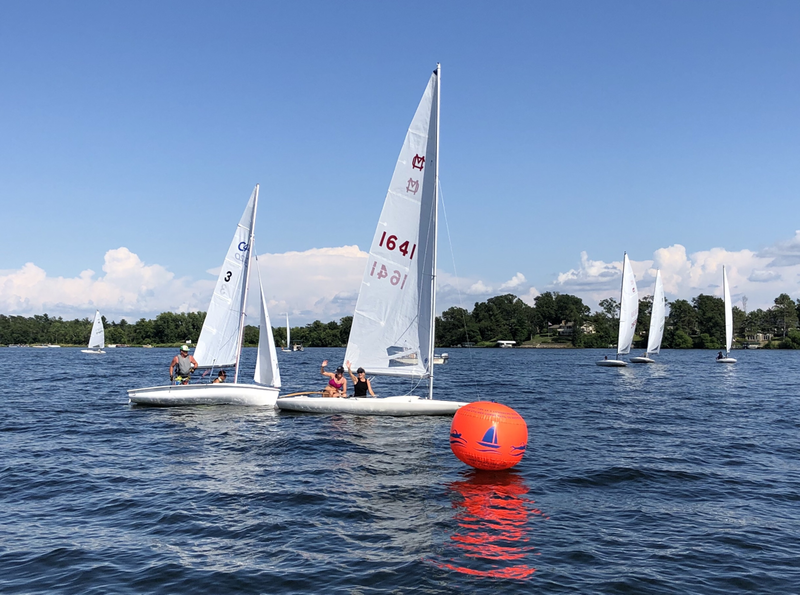 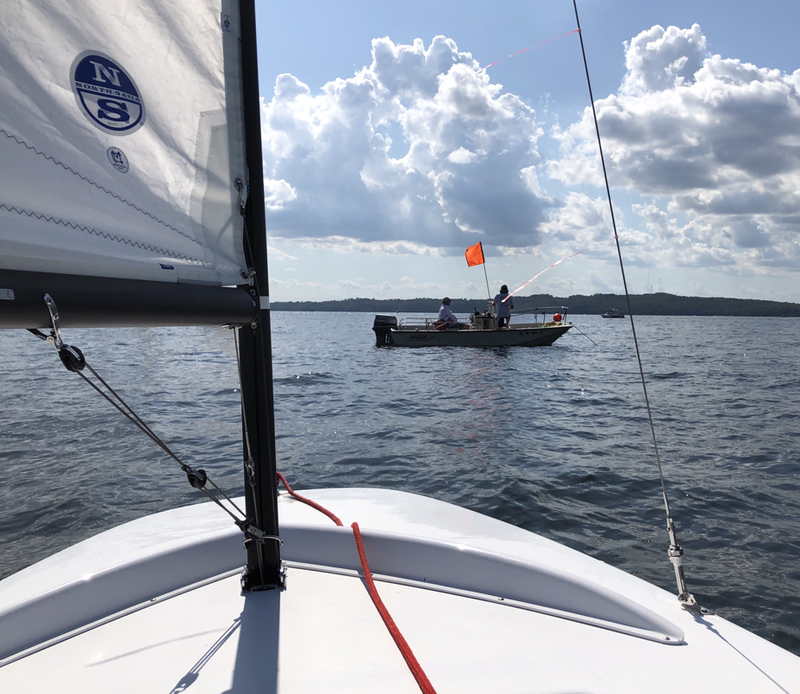 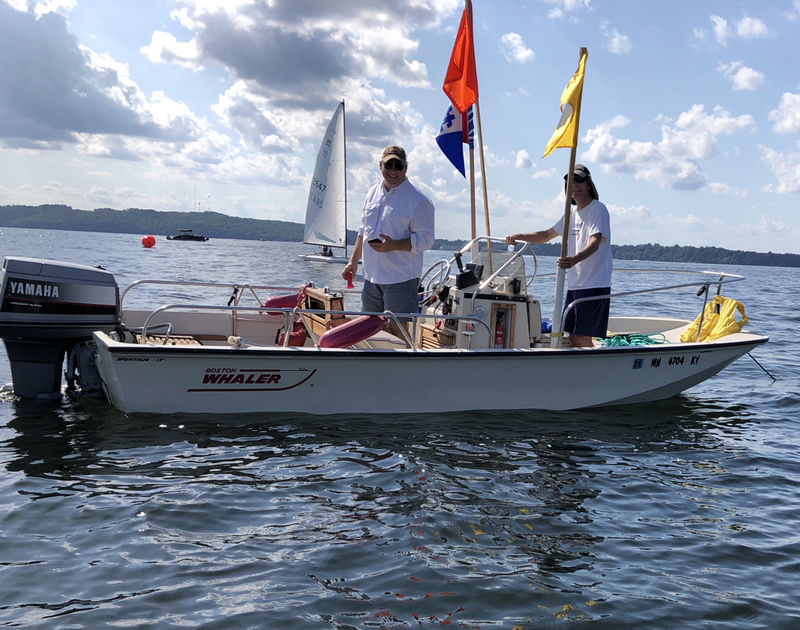 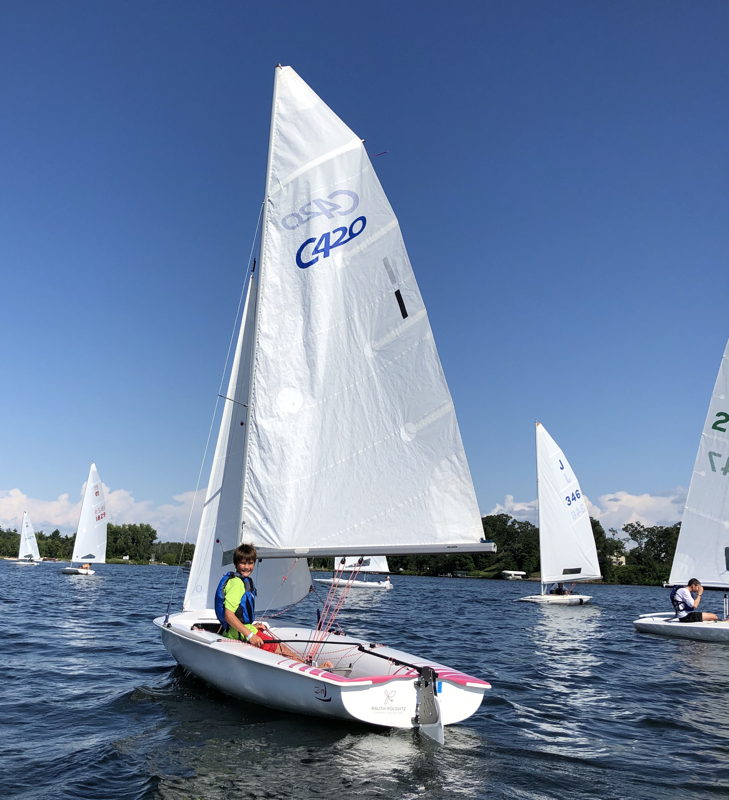 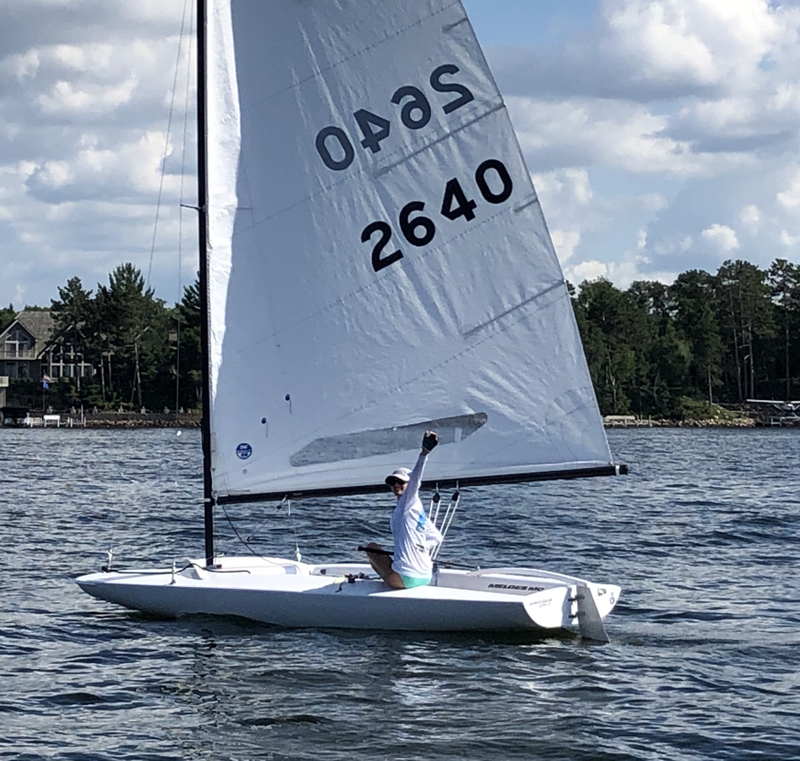 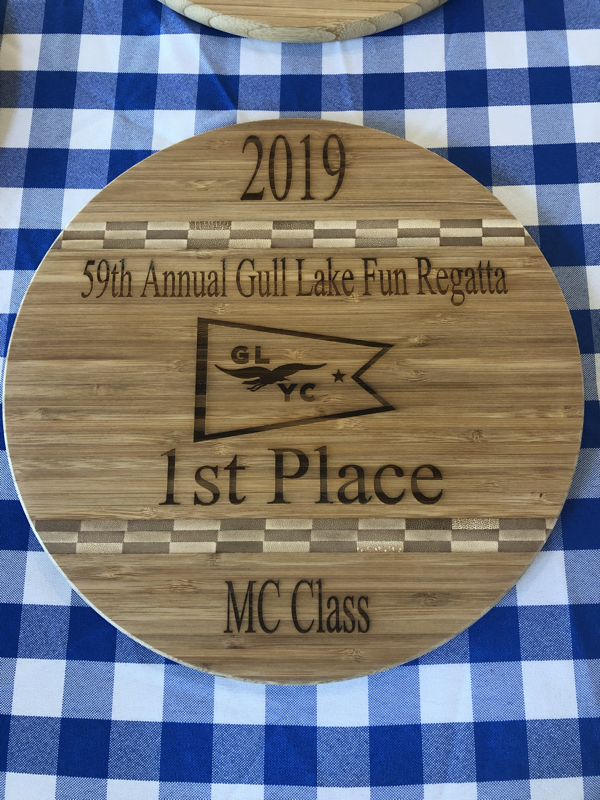 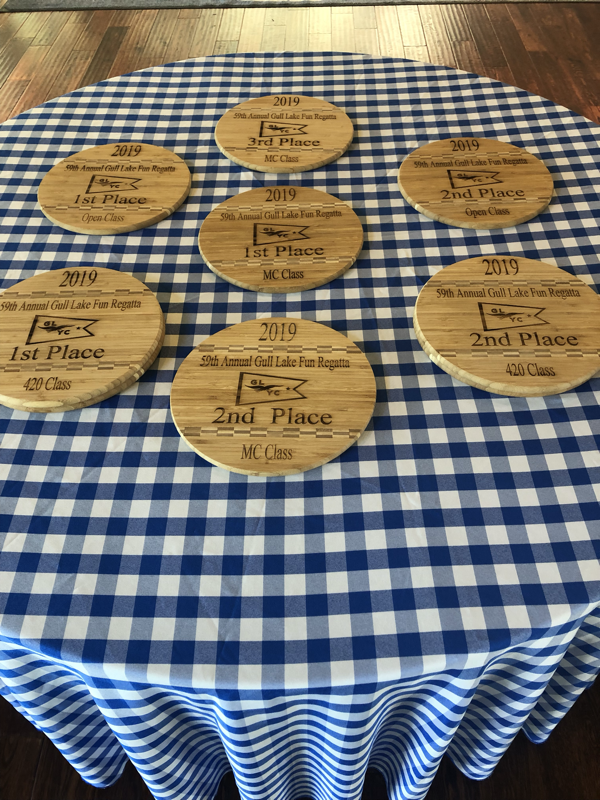 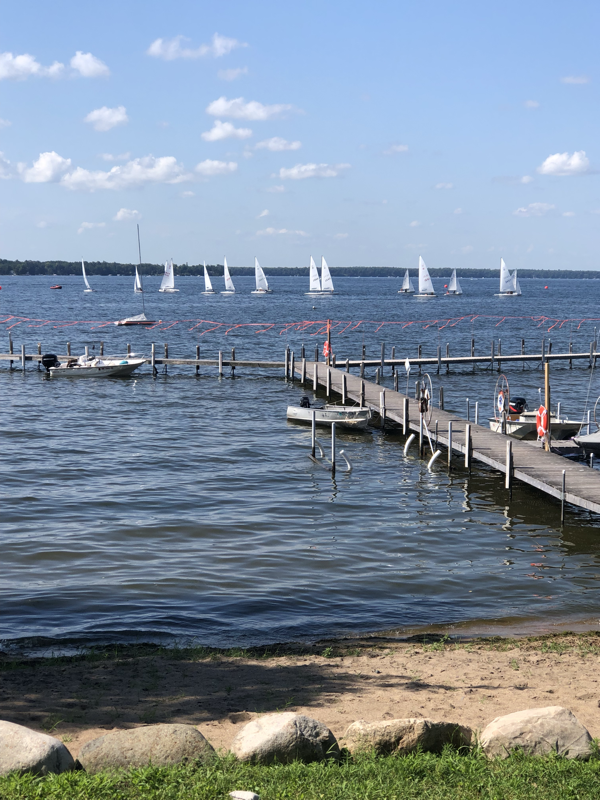 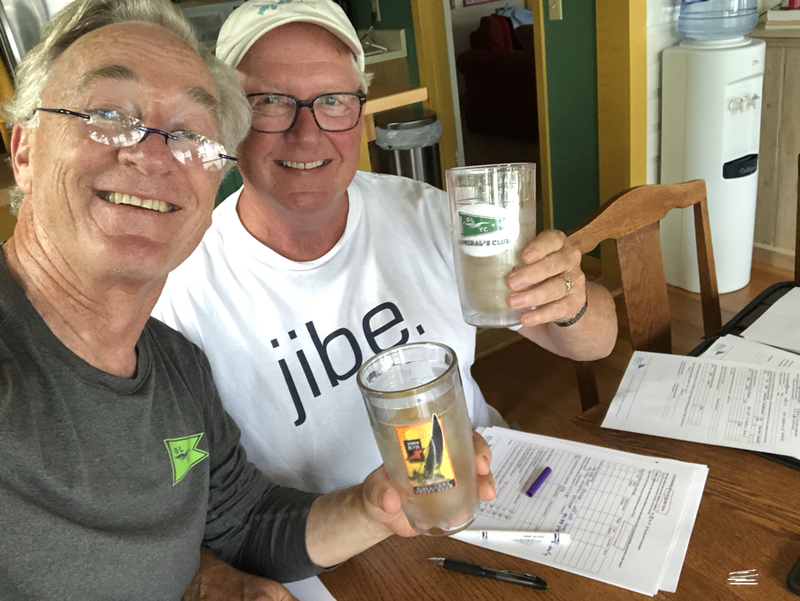